Andretti Autosport partners Butterball and DHL teamed up with 2014 Indianapolis 500 winner Ryan Hunter-Reay and his team to give back to the Indianapolis community by donating to agencies served by Midwest Food Bank Indiana.

On November 14, 2017, Butterball, the producer of 20 percent of the nation's turkeys, and Andretti Autosport, the back-to-back 500 winning team, gathered at Kroger in downtown Indy to deliver over 700 Butterball turkeys and 1,000 boxes of stuffing to agencies served by Midwest Food Bank. This was the fourth year for the annual event.

DHL provided couriers and vans for the pickup and delivery of the food. Helping to feed over 4,500 local people, the donations were given to the Damar Academy, the Mary Rigg Community Center, St. Vincent de Paul, Westminster Neighborhood Services, and the Wheeler Mission. Hunter-Reay and Kerry Doughty, Butterball CEO, helped with the distribution.

"At Butterball, giving back to those in need in the communities where our employees are based is part of our core values," says Doughty. "As a native Hoosier, this is an event I look forward to year."

MFB Indiana is gratified to see these companies and individuals serving the community. "The event expanded this year and it looks like that will continue to happen moving forward," says Midwest Food Bank Indiana Executive Director John Whitaker. 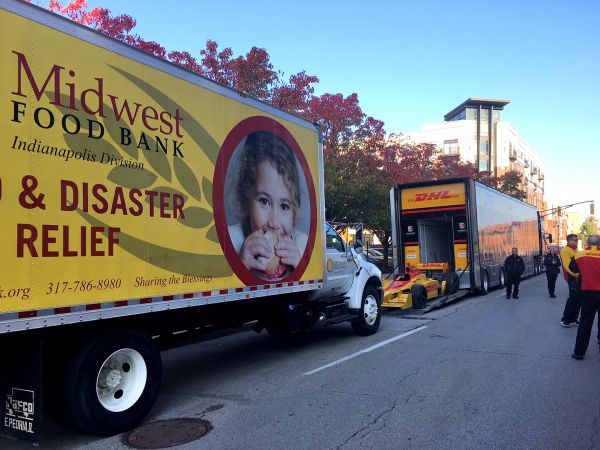