When Bill Dunbar volunteered at Midwest Food Bank Normal, he was not about being recognized for his work. He preferred to work quietly and get the job done. Bill passed away suddenly and unexpectedly in December 2020, leaving a void in his family and at MFB.

Bill's first volunteer time at MFB was with a group of co-workers from State Farm. He immediately found an excellent outlet for his generous soul. To be able to help meet the most basic of human needs by serving at MFB brought him great joy and satisfaction. He appreciated the straightforward and uncomplicated process MFB follows for food distribution and the amazing (and extensive) group of volunteers with whom he served.

Upon retirement, Bill became a "regular," frequently seen serving. He initially led volunteer groups in the evenings after work. His great way of making people feel at ease and wonderful sense of humor could make even scooping frozen green beans fun. He particularly enjoyed working with young people.

One evening, he was leading a group of young teens. They had finished their project for the evening, and he was wrapping up by telling them just a bit more about the impact of their service and saying thank you. As they were leaving, one of the young women in the group came up to him and said, "I just wanted to tell you that my family and I have been recipients of MFB food and to thank you for helping to make that happen." Bill was so touched by the willingness of this young woman to come forward to say thank you and be able to see the "face" of someone being fed because of MFB.

As time went on, Bill served in more and more ways. He took on the adventure of getting his class C driver's license and began picking up food donations from various locations. Bill took on forklift training and was often seen working in this capacity in the warehouse. He was occasionally asked to give a presentation of MFB to other organizations or churches. One particular Sunday, he arrived at a church to find that he was the sermon for that morning. As he spoke, he was reminded again of how MFB service reflects God's call to love our neighbor.

Bill's love of children led him to a relationship with a Sugar Creek Elementary School class. The teacher was a childhood friend of Bill's daughter. When Bill came to the school in a huge MFB panel truck, he was instantly "famous." The kids loved "Mr. Bill" and later came to MFB, where he led them on a tour. 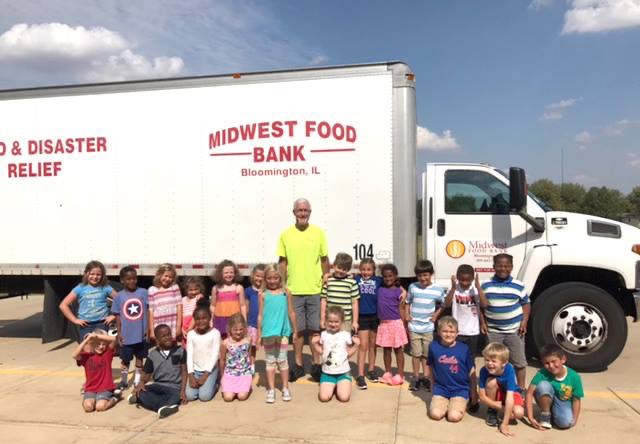 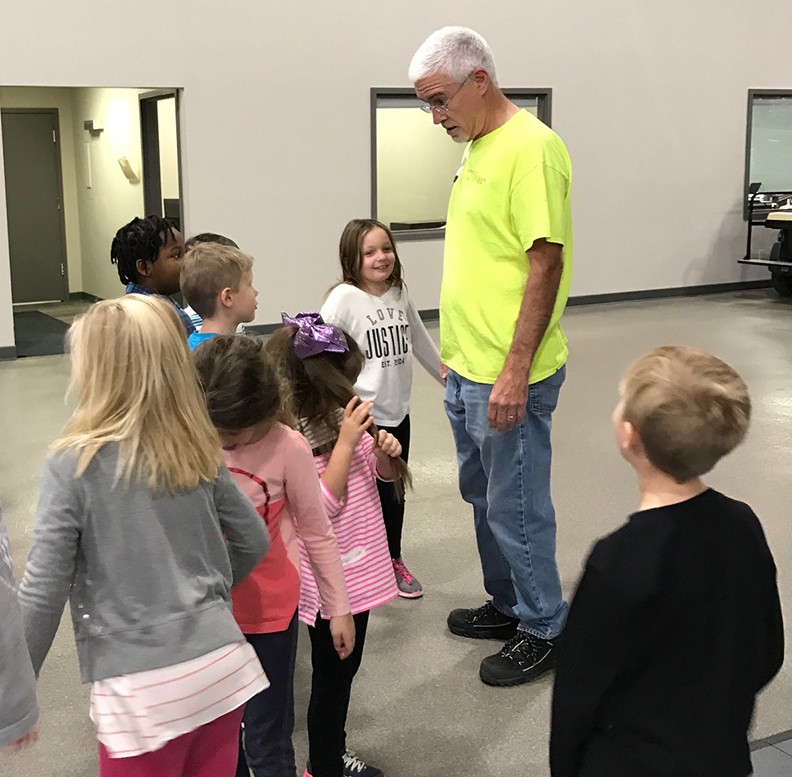 Upon retirement, Bill became a "regular," frequently seen serving. He initially led volunteer groups in the evenings after work. His great When Bill passed away, his family wanted memorial gifts to go to Midwest Food Bank Normal. It was their desire that a tangible piece of equipment be purchased with the memorials.

"At that time, we were in desperate need of a new forklift with a special rotator attachment," says Tara Ingham, Executive Director of MFB Normal. "It was decided that his memorial money would partially fund this need."

When all of the money had been collected, it was enough to fund a new forklift completely. To the family, it is a fitting memorial to have a piece of equipment that is an essential part of the daily operations of MFB.

"When we named this as the designated memorial for Bill, we never dreamed we would see such an outstanding response," says Julie, Bill's wife. "We are humbled by the generosity and overwhelmed with the love and respect for our "Chilly Billy" (Bill often worked in the freezer at MFB, earning him this nickname.)

Bill is missed at MFB. The forklift is a daily reminder of his heart to serve others.

"We are still in disbelief that he is gone," says Julie. "But we are comforted by knowing how grateful he would be for this outpouring of love and support. Thank you for your kindness." 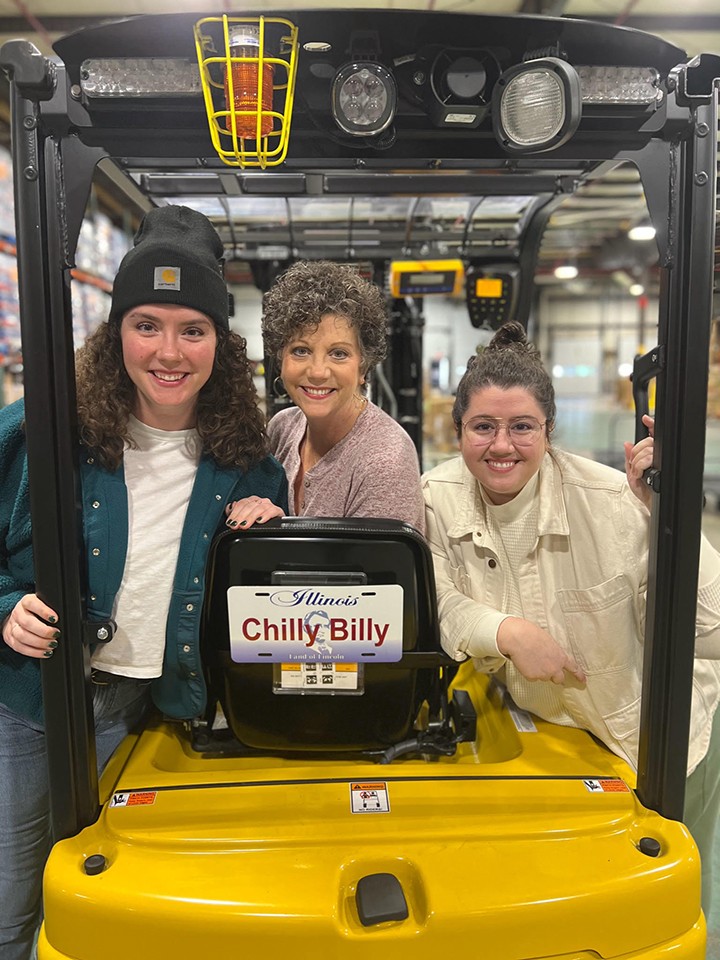 Bill's wife and daughters with the "Chilly Billy" forklift. 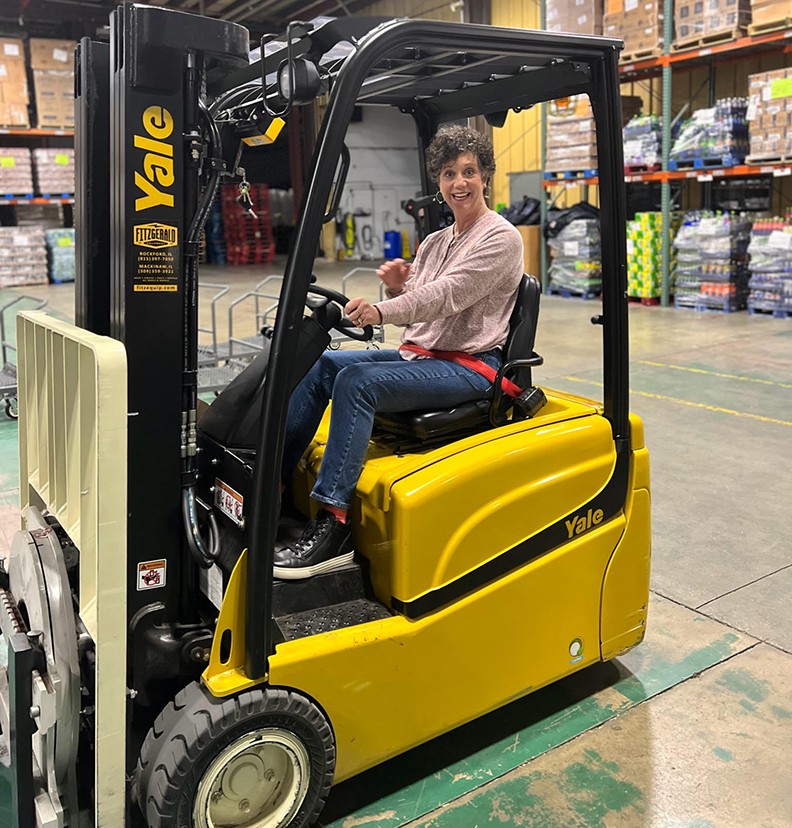