MFB Bloomington 2022 Volunteers of the Year

Each year hundreds of volunteers walk through the doors of Midwest Food Bank Bloomington-Normal and give thousands of hours of their time. While it's traditional for organizations like ours to name a "Volunteer of the Year," we aren't able to select just one volunteer in our amazing group of 9,000. Recently, MFB recognized the efforts of four volunteers - Francesca Erb, Chris Leese, Larry Mariani, and Roger Kennell - as outstanding volunteers for 2022.

Francesca Erb - Since 2016, Francesa has accumulated 2,600 hours at MFB. She often arrives early and stays until everything is cleaned up during food distribution weeks. Francesca's work ethic is just part of the story, though. She has a welcoming personality that makes new volunteers comfortable.

"Francesca is an encouraging, steady, and calm presence in the midst of what can sometimes feel very chaotic and overwhelming," says Donna Haas, MFB volunteer coordinator. "When I was new to my role, I benefited from her wisdom while she patiently answered my questions."

Besides food distribution, Francesca helps with the Hope Packs program, inventory, the Big Give program, and pedals many miles for the MFB Flyer fundraising event. She was also instrumental in helping MFB move to its current location in 2016. 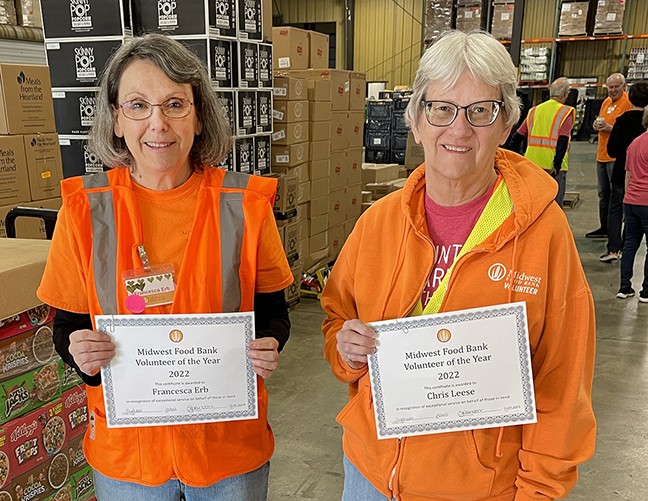 Francesca Erb and Chris Leese, two of the Bloomington-Normal Volunteers of the Year.

MFB Bloomington-Chris Leese - Inspiring and consistent is how Rich Beasley, MFB Operations Manager, describes Chris. She volunteers during distribution days and has served more than 1,800 hours since 2017. Those hours of service during distribution require a lot of physical effort - loading and carrying boxes of food. But Chris does that while building relationships with staff, volunteers, and the food partners that come on distribution days.

"Hearts have been touched, situations have been prayed for, and people have simply been extended the love of Jesus," says Rich. "Chris is an admirable representation of being the hands and feet of Jesus in our warehouse." 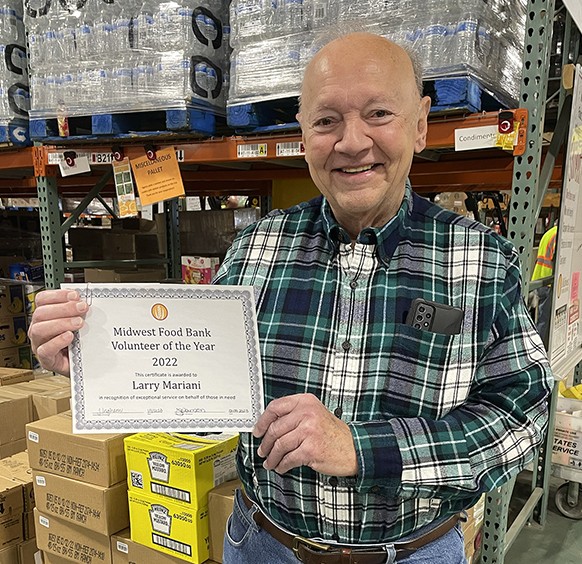 Larry Mariani - Faithfully and consistently, Larry has volunteered since 2015 by using his skills with numbers to assist MFB. He balances accounts, pays bills, runs countless reports, and has adopted new technology-based accounting systems with grace and dedication.

"It would not be possible to operate the MFB mission from this facility without his hard work and passion for financial integrity," says Tara Ingham, Executive Director.

Larry's stable service in accounting is how this faith-filled family man works alongside MFB to help hungry people. 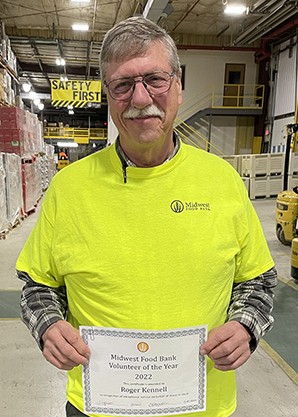 Roger Kennell, an MFB Bloomington-Normal Volunteer of the Year.

Roger Kennell - In two years, Roger has given 2,265 hours to Midwest Food Bank. Most of those hours have been behind the wheel. He drove 34,056 miles in 2022, which is about 20 percent of the semi miles for the year. It's not just about driving, though.

"Roger shares the love of Christ when he is on the road. He makes deep connections with the people he meets," says Jeni Hanson, Procurement Manager. "He often helps load or unload, makes extra runs or shares a meal with someone along the way."

When a need arises, Roger doesn't hesitate to volunteer. He took a load of bottled water to Kentucky following the flooding and realized more loads were needed.

"That meant multiple nights sleeping in the truck when it wasn't planned for," says Jeni. "Roger saw a need and stepped up to bless that community in a special way."

Besides driving a semi for MFB, Roger also drives a forklift in the warehouse.

Each of these volunteers is a blessing to MFB staff, food partners, and the people they encounter along the way. Thank you to our 2022 Volunteers of the Year.